Startup #1: NumbersQ.com - Know the state of your business in 30 seconds 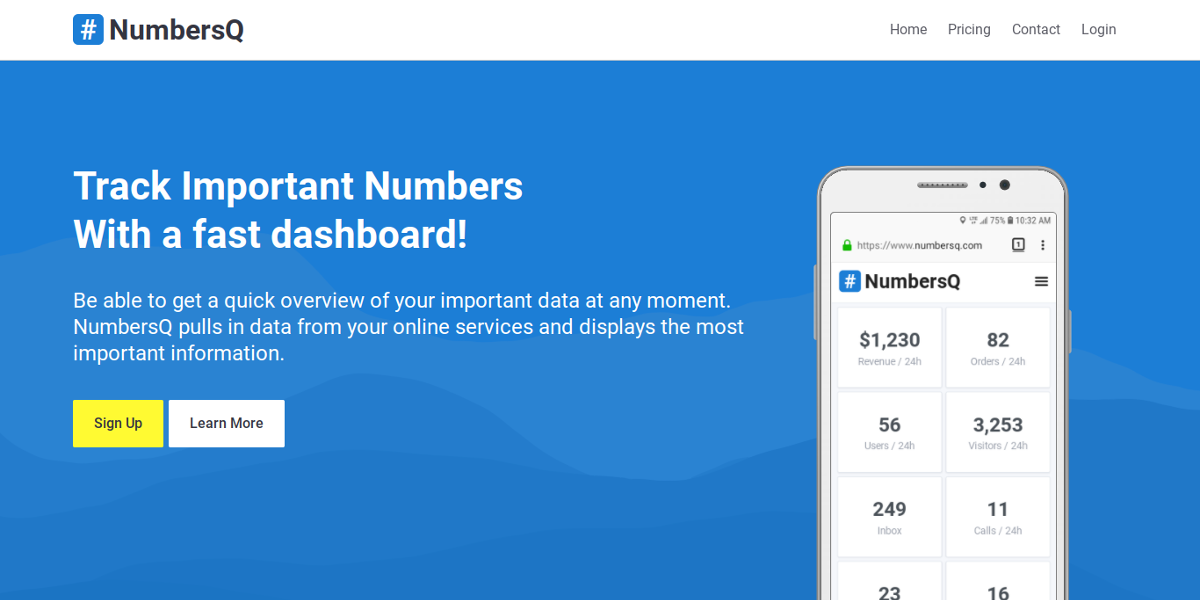 Startup #1 has officially launched! NumbersQ.com helps users track business and marketing numbers to stay up-to-date on the state of their business.

The goal is that the NumbersQ will be the first page business owners check when they get started in the morning. The website is set up so that users can connect with other online services and pull in those numbers. Instead of trying to provide a lot of explanations, I figured it would probably be easiest to show a working example. You can see my live NumbersQ page here:
https://www.numbersq.com/agraddy

As you can see, it provides live numbers on revenue and social media marketing. The numbers can be customized for each user. Anyone who is sharing numbers publically can use it for free. In order to have a list of private numbers that cannot be viewed by others, there is a monthly fee.

While working with one of my previous startups, I was trying to run a marketing campaign and all I wanted to know was the daily advertising costs. It was always frustrating how much time it took to load up the dashboard to just learn one number. I knew that I could pull that number out with the API.

What I've normally done in the past is build a custom tool that solves my own problem and then move on. But this time I decided I should try something different. Instead of building the tool just for me, I would build the tool so that I could sell it to others too. I ended up creating the initial marketing page a couple years ago but then never actually built the service.

When I was starting this 12 Startups in 12 Months journey, I knew that NumbersQ was the first startup I wanted to build.

The launch day for this project is about 2 and half weeks late. I knew this first launch would involve a lot because I would be building a lot of the foundations for the future projects. It would have been nice to launch on time, but I'm really happy with where everything is at. Here is the upcoming schedule:

I'm now playing catch-up on everything so these are aspirational goals that I may not meet.

The next startup launches Wednesday, August 31, 2022. Originally I was planning a different startup for number two, but I found out about a Twitter hackathon with a due date of August 19th. I was planning a Twitter tool for one of my later startups but I'm moving it up to number 2 so that I can try to get it submitted to the hackathon (a competition to build new apps).

My philosophy on using Twitter (and any other social network) is Promote others, Share what your learn, and Connect users with each other. I haven't found a Twitter tool that really matches my philosophy (although there are a few that comes close to what I'm wanting). Most of the Twitter tools I see help you create content; I'm looking for a tool that lets me help others. There is a very short window for the initial due date so the features on the initial launch will be fairly limited.

Thanks for all the support, I'm grateful to be on this journey. See you soon!